Grosvenor Prints have the pleasure in sending out our new Catalogue 109 – a mixture of portraits, topography both Foreign and UK, Sports and Pastimes such as fishing and cricket, Americana, satire including Gillray, maps and some Napoleon.

Jacob Bates. The Famous English Horse Rider. Der berhumte Englishe Berieter Jacob Bates. Jeaque Bates Fameux Piquer anglois.
G. P. Nusbeigel, ad viv. del et sculpsit.
Norib 1766.
Extremely scarce engraving, 18th century watermark. 375 x 480mm (14¾ x 19″). Engraver’s text weakly inked, margin notched lower left, slight creasing in right margin. Small margins.
Jacob Bates, an eighteenth century English equestrian performer, was one of the first showmen to make a mark as an entertainer. Although his emulators (Price, Johnson, Balp, Coningham, Faulkes, and ‘Old’ Sampson), had become fixtures of London’s pleasure gardens, it does not appear that Bates ever performed in England. Instead he based himself in the German States, but performed as far away as Russia (1764-65) and America (1772-73). This portrait was drawn and engraved in Nuremberg in 1766 by Georg Paul Nusbeigel, showing him standing proudly by his horse, with more portraits of Bates various stunts on one, two and three horses, watched by a large crowd of spectators in the distance. This is a second state, with the French title added to the plate, as the example in the British Museum.
BM 1851,0308.54.
[Ref: 56080] 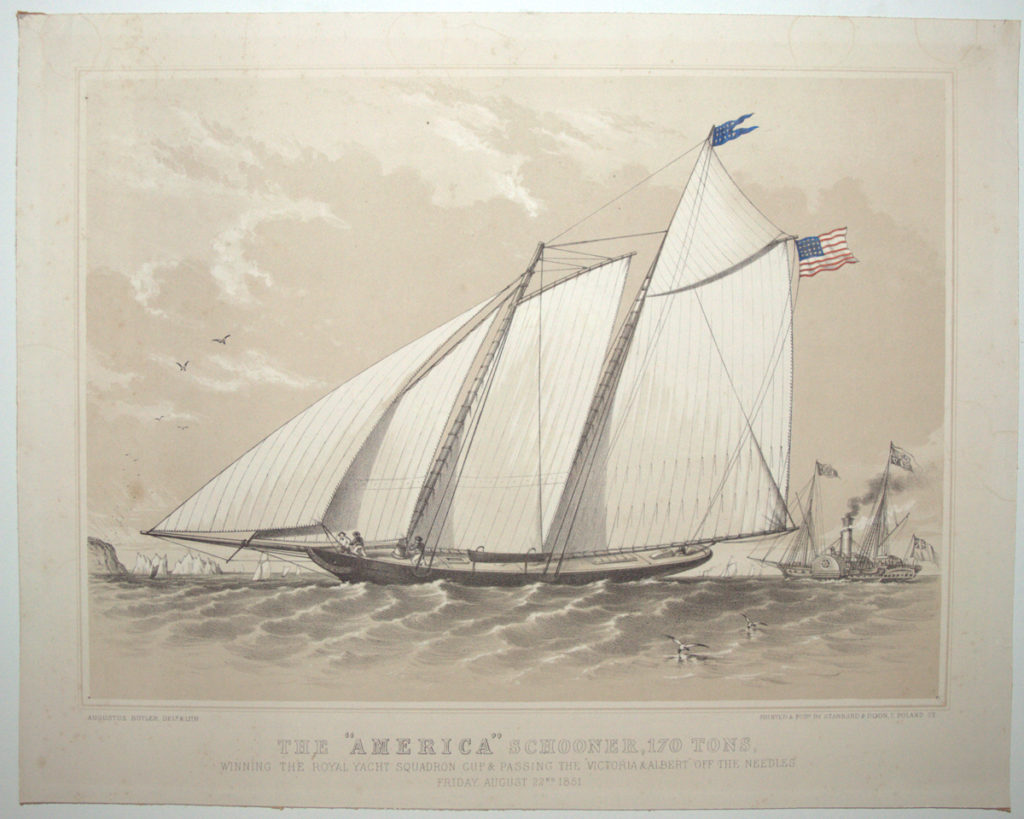 The ”America” Schooner, 170 Tons, Winning the Royal Yacht Squadron Cup & Passing the ”Victoria & Albert” off the Needles. Friday, August 22nd 1851.
Augustus Butler, Del.t & Lith.
Printed & Pub.d by Stannard & Dixon, 7 Poland St. [n.d., c.1851.]
Rare tinted lithograph with touches of hand colour. Printed area 280 x 340mm (11 x 13½”).
A marine scene showing the Schooner Yacht ‘America’ sailing off the coast of the Isle of Wight in 1851. HMY Victoria and Albert was a twin-paddle steamer used as the royal yacht. For winning the race, ‘America’, built by a syndicate of members of the New York Sailing Club, was awarded the ‘£100 Cup’. Now known as ‘The America’s Cup’ after the first winner, it is the oldest international sporting trophy.
[Ref: 50444] 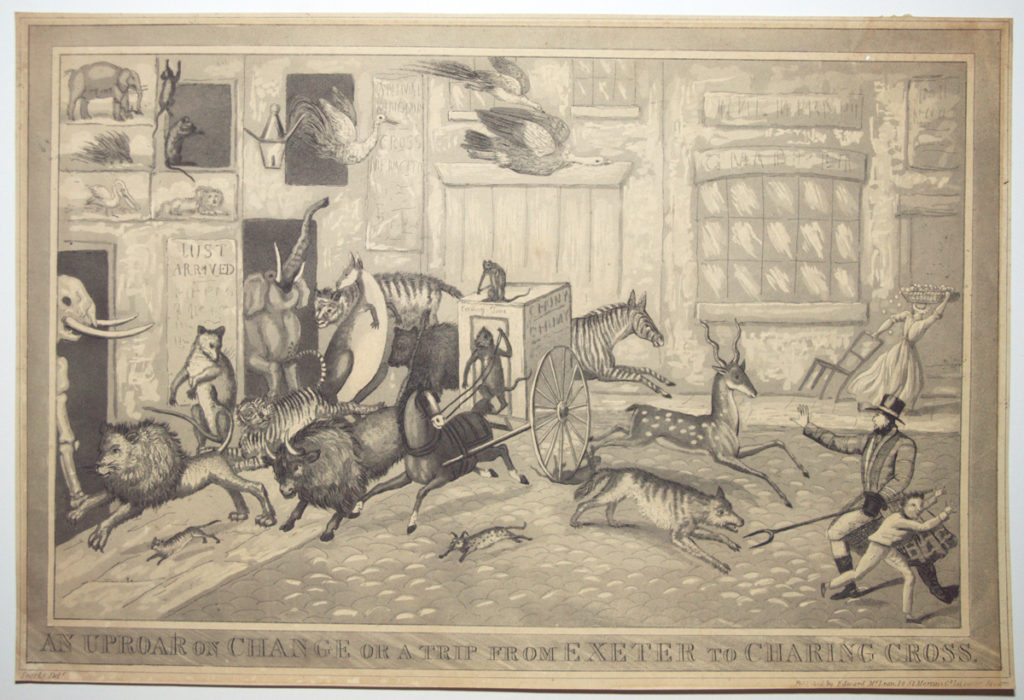 An uproar on Change or a Trip from Exeter to Charing Cross.
Sparks, Del.t
Published by Edward M.cLean, 14, St Martins C.t Leicester Square.
Very rare etching with aquatint; watermark Whatman Turkey Mill.. Sheet size Trimmed. Some creasing.
A satire on the moving of Cross’s Menagerie (formerly Pidcock’s) at Exeter Exchange on the north side of the Strand to the King’s Mews near Charing Cross in 1828, as part of general improvements to the Strand the Exchange was to be demolished in 1829 The scene depicts animals running amok making their own way to their new quarters including the skeleton of Chunee, the famous elephant shot in 1826. A Kangaroo, lions, tigers etc are also depicted in panic mode!
BM 15603
[Ref: 56143]

The full catalogue can be found here: Catalogue 109