Electrolytic operation or electroplating using electricity to coat a relatively mundane metal, such as copper, with a thin layer of steel (a few microns), giving greater resistance to the plate and enabling a larger number of print runs.

is an intaglio printmaking technique, a variant of etching, developed in the 18th century. Aquatint uses the application of a mordant to etch into the metal plate. Aquatint uses powdered rosin to create a tonal effect. The rosin is acid resistant and typically adhered to the plate by controlled heating. The tonal variation, called wash effects, is controlled by the level of mordant exposure over large areas, and thus the image is shaped by large sections at a time whithout any hatching.

metal fallout along the furrow dug by drypoint in copper, ink sticks into these barbs at the time of printing, which gives dry point its particularly sensitive character. Sometimes, it disappears with the wear of the plate if it is not steeled . The word ” barb” is also used to define irregular edges of non-trimmed paper. Iit is said that margins are not trimmed .

is carefully prepared as a relief pattern, which means the areas to show ‘white’ are cut away with a knife, chisel, or sandpaper leaving the characters or image to show in ‘black’ at the original surface level. The block was cut along the grain of the wood. It is necessary only to ink the block and bring it into firm and even contact with the paper or cloth to achieve an acceptable print.
The standing wood is more resistant to the tool than the wood of wire and allows greater finesse. (The art of carving the woodcut is technically known as xylography, though the term is rarely used in English).

steel tool, beveled, with which the artist digs a barbless groove. In contrast to dry point that scratches copper without removing metal, leaving barbs, burin removes a chip. A woodcut can easily be recognized by the sharpness of lines.

The principle of carborundum technnique, invented in 1967 by Henri Goetz, and assimilated to copper-plate engraving processes, is to use carborundum particles in order to obtain a more or less strong graining of parts of an image previously drawn onto a plate. For this purpose varnishes are used as glue which trap the grains of carborundum, silicon carbide, in order to constitute more or less rugged materials. Bigger is the grain, deeper are the asperities, and more dramatic black colors will become on paper.
For gray renditions, finer grains are used.
The plate, when finished, will be printed like a traditional intaglio/copper-plate engraving.

Impression left by the thickness of the plate in the paper when it went under the press. Some engraved and flattened engravings have almost no plate mark; there are still enough to recognize that they are engravings on metal. In the catalogs where we give the dimensions of the prints, we also speak of “witness” or ” printing plate”.

is traditionally the process of using strong acid cut into the unprotected parts of a metalsurface to create a design in intaglio (incised) in the metal.
In traditional pure etching, a metal (usually copper, zinc or steel) plate is covered with a waxy ground which is resistant to acid.The artist then scratches off the ground with a pointed etching needle where he or she wants a line to appear in the finished piece, so exposing the bare metal. The plate is then dipped in a bath of acid, technically called the mordant (French for “biting”) or etchant, or has acid washed over it. The acid “bites” into the metal (it dissolves part of the metal) where it is exposed, leaving behind lines sunk into the plate. The remaining ground is then cleaned off the plate. The plate is inked all over, and then the ink wiped off the surface, leaving only the ink in the etched lines.

when printing intaglio prints, cleaning parts that must appear in white is a delicate operation to carry out , without emptying the carvings oftheir ink. ou bien Delicate operation used during printing of copper-plate engravings where the parts which must appear in white are cleaned, without empting the carvings of their ink (Copper-plate engraving printing)

A watermark is an identifying image or pattern in paper that appears as various shades of lightness/darkness when viewed by transmitted light; it can be used for dating, identifying sizes, mill trademarks and locations, and determining the quality of a sheet of paper

is a printmaking technique, a variant of woodcut in which a sheet of linoleum (sometimes mounted on a wooden block) is used for a relief surface. A design is cut into the linoleum surface with a sharp knife, V-shaped chisel or gouge, with the raised (uncarved) areas representing a reversal (mirror image) of the parts to show printed. The linoleum sheet is inked with a roller.

The printing is from a stone. A method of printing originally based on the immiscibility of oil and water. Lithography originally used an image drawn with oil, fat, or wax onto the surface of a smooth, level lithographic limestone plate. The stone was treated with a mixture of acid and gum arabic, etching the portions of the stone that were not protected by the grease-based image. When the stone was subsequently moistened, these etched areas retained water; an oil-based ink could then be applied and would be repelled by the water, sticking only to the original drawing. The ink would finally be transferred to a blank paper sheet, producing a printed page. It was invented in 1796 by German author Alois Senefelder.

is a type of printmaking made by drawing or painting on a smooth, non-absorbent surface. The surface, or matrix, was historically a copper etching plate . The image is then transferred onto a sheet of paper by pressing the two together, usually using a printing-press.
Monotyping produces a unique print, or monotype. Although subsequent reprintings are sometimes possible, they differ greatly from the first print and are generally considered inferior. These prints from the original plate are called “ghost prints.”

It is a paper covered with a layer of gelatin and starch on which the artist can draw without having to handle lithographic stones which are very heavy. The drawing is done on the spot on the paper, then transferred to the stone.

is a printmaking technique of the intaglio family, in which an image is incised into a plate with a hard-pointed “needle” of sharp metal, as well as prints bearing the same name.

is a printing technique whereby a mesh is used to transfer ink onto a substrate, except in areas made impermeable to the ink by a blocking stencil. A blade or squeegee is moved across the screen to fill the open mesh apertures with ink, and a reverse stroke then causes the screen to touch the substrate momentarily along a line of contact. This causes the ink to wet the substrate and be pulled out of the mesh apertures as the screen springs back after the blade has passed.
*It is also known as serigraphy, serigraph printing and silkscreen.

this is a drawn groove left in the metal by means of tool or acid.

In art printmaking, a process consisting of cutting or etching a printing surface in such a way that all that remains of the original surface is the design to be printed. Examples of relief-printing processes include woodcut, linocut.

(also called raised ink) is the family of printing and printmaking techniques in which the image is incised into a surface and the incised line or sunken area holds the ink. It is the direct opposite of a relief print.
Some people say that “soft cut” comes from the Franco-Provençal “cut of ost”= reduction in army, in other words, everything that can be removed in opposition to relief printing.

is a process for reproducing text and images using a master form or template.

The art of carving the woodcut can be called “xylography”. 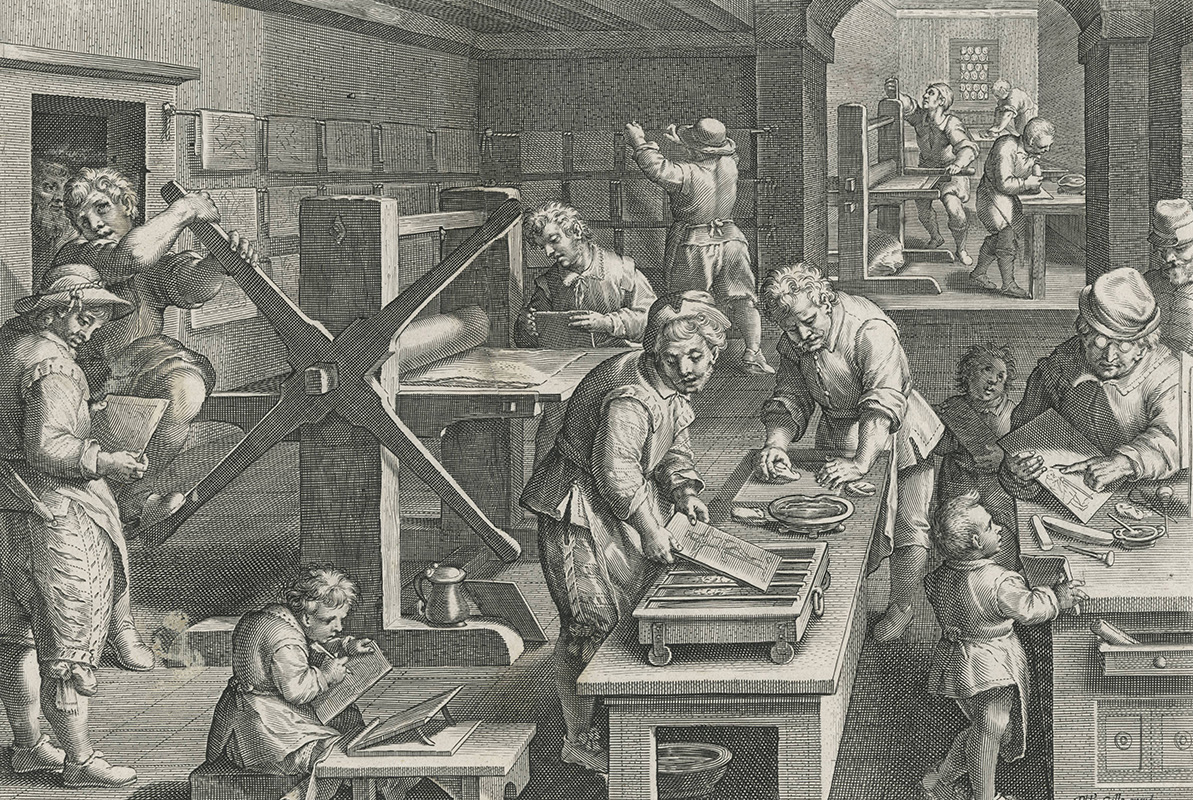