Grosvenor Prints has the pleasure in putting out Catalogue 106. It contains just over one hundred and seventy items and includes: Views Overseas including Chinese topography and Moore’s Rangoon, Views UK including Oxford, Satire including Darly, Portraits and some Decorative items. 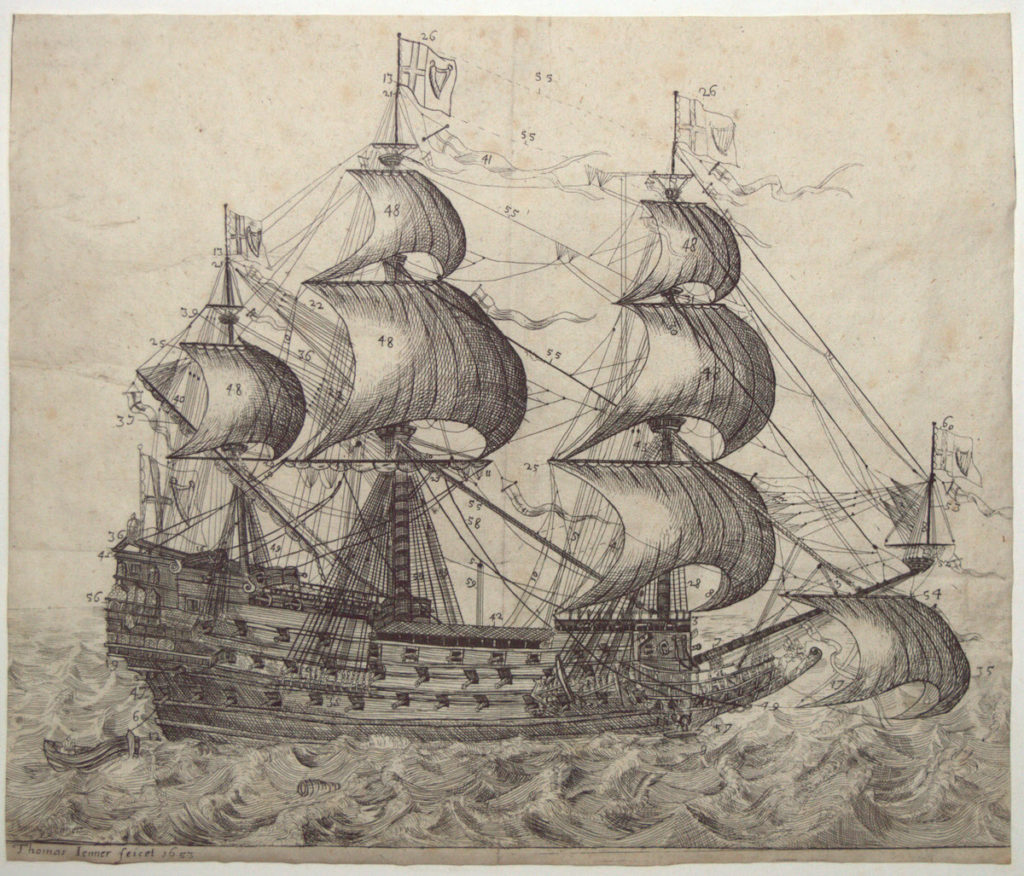 [The Soveraigne of the Seas builte in the Yeare 1637.]
Thomas Jenner [scratched in plate] [after John Payne].
Thomas Jenner feicet 1653
Rare etching, 17th century watermark. Sheet 205 x 245mm (8 x 9¾”). Trimmed into image on three sides, losing title at top.
Extremely scare & wonderful image, a survivor of the 17th century. A portait of ‘The Sovereign of the Seas’, one of the biggest warships of the Stuart navy, ordered by Charles I as part of the arms race with the Dutch and paid for with the notorious ‘Ship Money’ tax that made Charles so unpopular. This is a reduced copy of a two-sheet engraving by John Payne, published as a propaganda piece c.1638, with added key letters (key not present). Built by Peter Pett and launched in 1637, the ‘Sovereign of the Seas’ had 102 guns as specified by Royal command, but soon after she entered service the number was cut to make her faster and safer. The diarist John Evelyn described her as ‘a monstrous vessel … being for burthen, defense and ornament the richest that ever spread cloth before the wind’. During the Commonwealth she was renamed, first ‘Commonwealth’ then ‘Sovereign’, before being made the ‘Royal Sovereign’ on the Restoration of Charles II in 1660. She survived the three Anglo-Dutch Wars and the Nine Years’ War with the French only to burn while laid up at Chatham in 1697.
BM 1881,0611.274, also trimmed and damaged; see 1854,0614.252 for Payne’s original. Not in Hind.
[Ref: 55462] £1,350.00 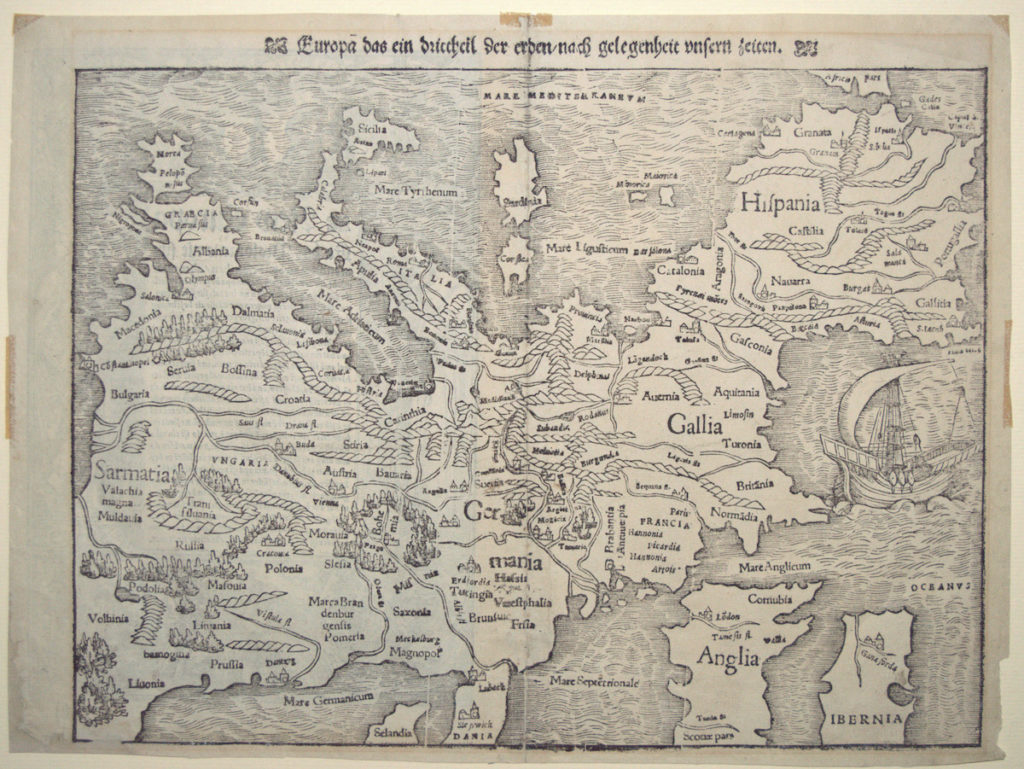 Europa das ein drittheil der erden / nach gelegenheit unsern zeiten.
[Basle, c.1550.]
Woodcut. Sheet 282 x 375mm (11 x 14¾”). Margin bottom left restored, tape stains in edges. Evidence of cracks in the woodblock.
Munster’s famous upside-down map of Europe, although omitting most of Scandinavia, Scotland and half of Ireland. Despite the strange orientation (a German convention to align maps with the solar compass) it is the first map of the continent not based on Ptolemy. The map was first used in Munster’s edition of Ptolemy’s ‘Geographia’ in 1540 and also appeared in his ‘Cosmographia’; the cracks in the woodblock first appeared in 1545. A new, similar block was used from 1571-2 until 1578, when a new map, copied from Ortelius, was introduced.
[Ref: 55504] £990.00 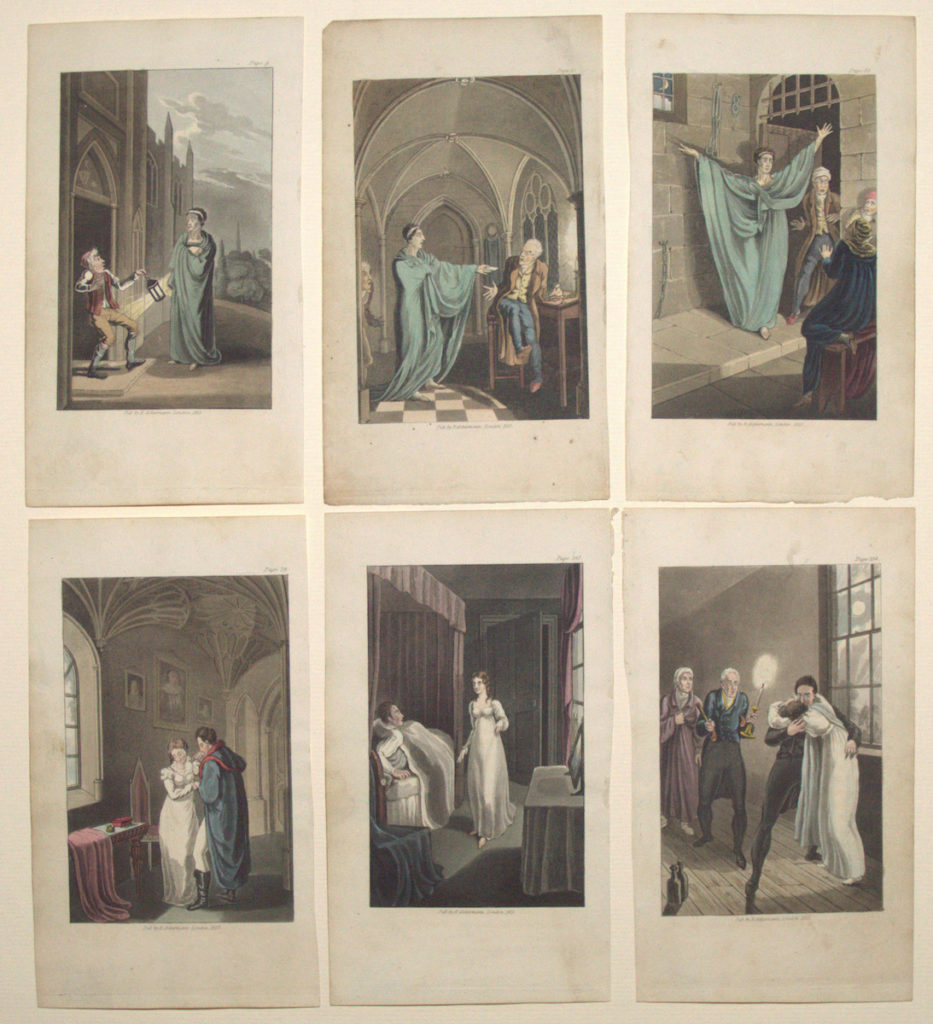 [Six illustrations from ‘Ghost Stories’.]
Pub. by R. Ackermann, London 1823.
A very rare complete set of six aquatints with hand colour. Sheets 175 x 100mm (7 x 4″).
A complete set of illustrations from ‘Ghost Stories, Collected with a Particular View to Counteract the Vulgar Belief in Ghost and Apparitions, and to Promote a Rational Estimate of the Nature of Phenomena commonly considered as Supernatural’. It contained eighteen short stories, although only two are illustrated: ‘The Green Mantle of Venice’, by H. Clauren (the only story with an attribution), has four; ‘Marianne’ has two.
The text of a later edition can be found on Google Books.
[Ref: 55529] £650.00

The full catalogue can be found here:
Catalogue n°106