Grosvenor has the pleasure in putting out Part Two of our special Catalogue 100.This includes: Overseas Views including Americana and Australiana, George Stubbs, Books, Satire and some Fine Art items.Highlights include:

The Royal Charlotte Auricula.
Printed for Carington Bowles, N.o 69 in St Pauls Church Yard, London.
Fine & very rare mezzotint. 355 x 245mm (14 x 9¾”). False margins added. A tiny amount of time staining in the publication line.
A fantastic image. Still life of a pink primula auricula in a plant pot. A bird, likely a bullfinch, perches on the lip of the pot and a butterfly, possibly a monarch, sits on the leaves.
Gordon Dunthorne Flower and Fruit Prints p223.
[Ref: 54818] 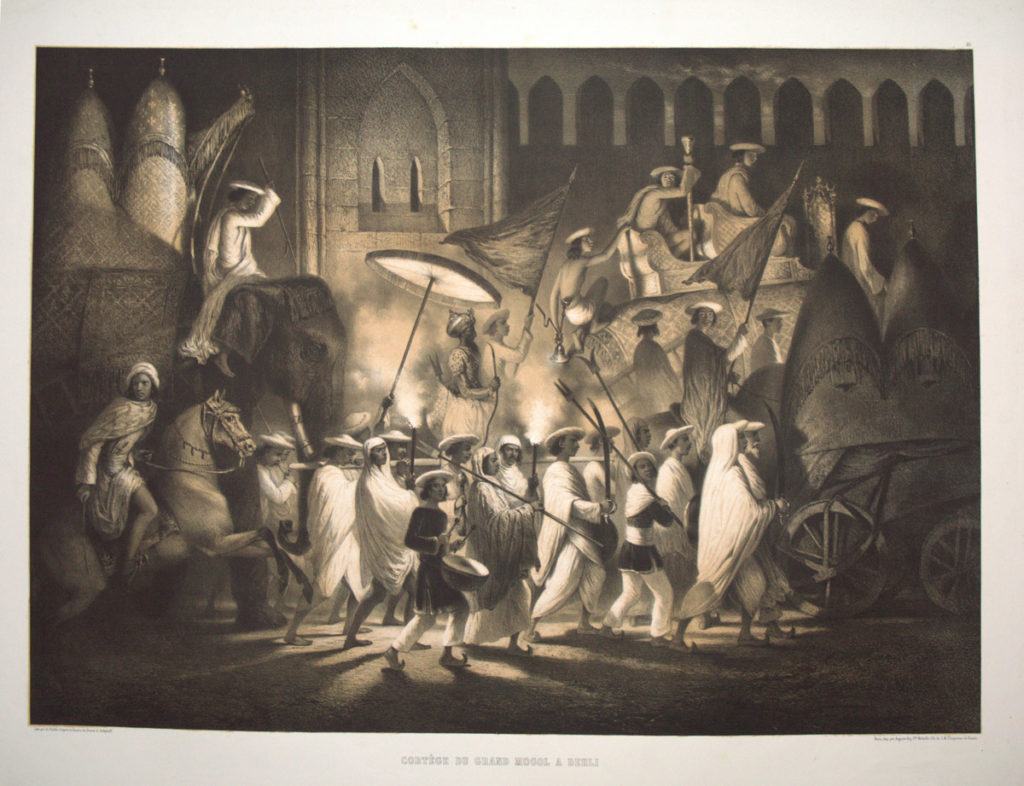 Cortège du Grand Mogol à Delhi.
Lith par de Rudder lith d’après le dessin du Prince A. Soltykoff.
Paris Imp. par Auguste Bry, G.de Medaille d’Or de S.M. l’Empereur de Russie.
Tinted lithograph. 505 x 690mm (20 x 27¼”), with very large margins. Uncut.
A very atmospheric night scene of the entourage of the Grand Mughal Bahadur Shah Zafar (seated in a litter), the defensive walls of the city behind. Bahadur (1775-1862), a noted poet and calligrapher, was the last of the Moghul Emperors, exiled to Rangoon by the British after the uprising of 1857. Prince Alexey Soltykoff (Aleksandr Mikhailovich Saltuikov, 1806-1859) had worked for the Russian Foreign Service (including visits to Constantinople, London and Teheran) before retiring and making two trips to India (1841–43 and 1844–46). In 1850 his sketches were lithographed in this large folio format and published as ‘Voyages dans l’Inde’.
[Ref: 55155]

Defeat of the British Army, 12,000 strong under the Command of Sir Edward Packenham, in the attack of the American lines defended by 3,600 Militia commanded by Major General Andrew Jackson January 8the 1815, on Chalmette plain, five miles below New Orle ans on the left bank of the Mississippi. Drawn on the Field of Battle and painted by H.the Laclotte arch.t and assist Engineer in the Louisiana Army the Year 1815.
Dessine par H.the Laclotte. Grave par PL Debucourt.
[c.1817.]
Extremely scarce etching with aquatint, printed in sepia. Sheet 545 x 695mm (21½ x 27¼”). Several closed tears from extremities, some into image. The lower right corner has been re-attached.
Magnificent prospect of the battle at Chalmette Plantation, Louisiana, on January 8th 1815, the largest engagement of the Battle of New Orleans, a prolonged battle between the United Kingdom and United States which took place from December 23rd, 1814, to January 26th, 1815. American forces, commanded by General Andrew Jackson, defeated an invading British Army intent on seizing New Orleans and the vast territory America had acquired with the Louisiana Purchase. The Treaty of Ghent had been signed on December 24th, 1814, but news of the peace would not reach the combatants until February. The battle is often regarded as the greatest American land victory of the Anglo-American War of 1812 to 1815, called the ‘War of 1812’. At the end of that January day, the British had 2,042 casualties: 291 killed (including Generals Pakenham and Gibbs), 1,267 wounded (including General Keane) and 484 captured or missing. The Americans had 71 casualties: 13 dead; 39 wounded and 19 missing. Seal of the United States between English and French titles. Print made by Philibert Louis Debucourt (1755 – 1832), after the painting by Jean-Hyacinthe Laclotte, composed from his first-hand sketches of the battle. Laclotte was an architect, artist and engineer born in Bordeaux. He worked in New Orleans from 1806 until 1815, where he designed the Orleans Theater and planned the Faubourg Plaisance subdivision of the city. In 1810, he had formed a partnership with Arsene Latour and opened a school of drawing, architecture, carpentry and decorating. This print comes onto the market extremely rarely (usually hand coloured). Eight impressions are known in institutional collection: at the Library of Congress, New York Public Library, Amon Carter Museum, the New Orleans Historical Society, and four at the New York Historical Society.
[Ref: 55078]

Link to the full listing can be found here: