The catalogue includes the usual suspects of Rowlandson, Gillray and Cruikshank as well as many other familiar faces. Showcasing the social, political and military scenes of the time. 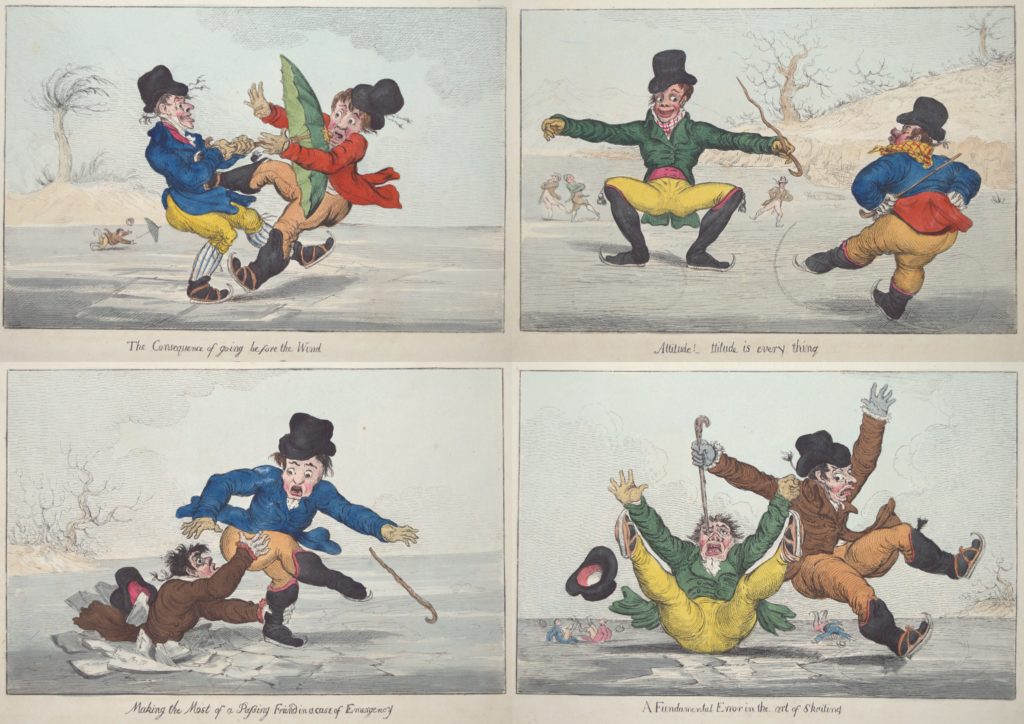 An elderly man, holding his umbrella in front of him to form a sail, cannonades into another skater, who falls, the apex of the umbrella entering his mouth, while his foot strikes the stomach of the aggressor. The ice cracks beneath them. The latter wears wrinkled ankle-boots. In the background, a man falls forward, his umbrella and hat torn from him by a gust, whose strength is indicated by a wind-swept. [&] Two skaters strike attitudes in the foreground. One, with hands on hips, describes a curve with one foot, the other foot being held out stiffly. He looks aggressively towards the other, a younger man who bends his knees, arms extended, and grins at his rival. The former wears a spencer over a short coat, the latter a tail coat; both wear Hessian boots, but those of the latter, who is more fashionably dressed, reach to the knee and are tasselled. Both hold sticks. In the background, a pair of men with folded arms skate back to back in doing a figure of eight; a third skates forward fast with hands on hips. The scene is a lake in a snow-covered landscape. [&] A man who is falling through the ice clutches desperately at the leg of a passing skater so as to drag him towards the hole he has made. [&] One man falls violently, arms and legs in the air; he brings the ferrule of his stick heavily down on the eye of a neighbour who has just landed on his posterior, his legs and arms extended. In the background three other skaters have fallen, and lie or sit, legs in the air.