[Hirayama Jinta] Japanese Prints of Shell Effects. [n.d., c.1877.]Six very scarce Japanese woodblocks, printed in colours. Each sheet c. 220 x 150mm (8¾ x 6″), laid on card in pairs, with a typed English title label (as above). A little wear. Six rare Japanese Ukiyo-e prints promoting shell-effect fireworks by Hirayama Jinta (1840-1900), each titled in Japanese. In 1877 Hirayama Jinta founded a firework manufactory famous for its innovations in bringing new colours to Japanese fireworks. He exported fireworks to Britain, where they were marketed by Brocks, who offered versions of these prints numbered to refer to a price list. In 1883, Hirayama Jinta became the first Japanese to earn a patent from America as a fireworks expert. The Japanese titles suggest these were issued for the Japanese market but acquired by a Briton, perhaps at the first public display of Hirayama Jinta’s products (see ref 57178). An export catalogue he produced for international sales is still preserved at the Yokohama Library. [Ref: 57220] £950.00 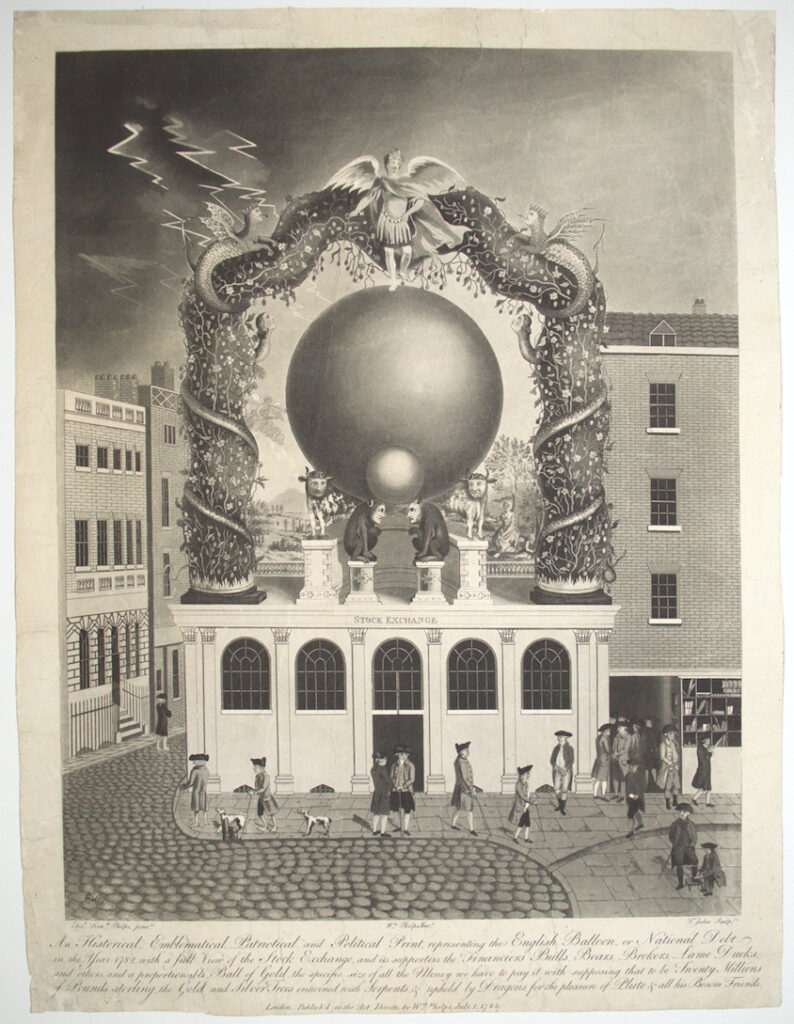 An Historical, Emblematical, Patriotical, and Political Print, representing the English Balloon, or National Debt in the year 1782, with a full View of the Stock Exchange, and its supporters the Financiers Bulls, Bears, Brokers, Lame Ducks, and others, and a proportionate Ball of Gold, the specific size of all the Money we have to pay it with supposing that to be Twenty Millions of Pounds sterling, the Gold, and Silver Trees entwined with Serpents, & upheld by Dragons, for the pleasure of Pluto & all his Bosom Friends.E.H.P. Eliz.h Hen.ta Phelps, pinx.t. W.m. Phelps Inv.t. F. Jukes Sculp.t.London, Publish’d as the Act Directs, by W.m Phelps, July 1, 1785.Aquatint with etching & engraving. Sheet 540 x 410mm (21¼ x 16″). Trimmed into plate, some wear, with repairs. Extremely rare but damaged. A satire of the National Debt, with the Stock Exchange (New Jonathan’s Coffee House in Change Alley) with a balloon on the roof held in place by bulls and bears with human faces. In the street are investors, some with webbed feet indicating they are ‘lame ducks’. BM Satires 6803. [Ref: 57123] £950.00