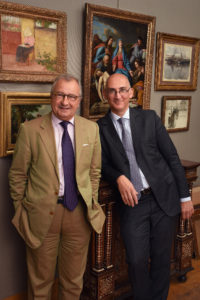 Established in Paris in 1986 by Gabriel Terrades, the eponymous gallery is located in Rue d’Alger, close to the Tuileries Gardens. Gabriel Terrades likes nothing better than to share his passion for old-master and 19th-century painting with art lovers and curators from major institutions alike. In 2001, he was joined by Antoine Cahen. Their eclectic taste and exacting standards given them a distinctive vision of Italian and French art from the 16th to the early 20th century. The gallery organizes regularly exhibitions largely devoted to French painting, accompanied by catalogues that have become  standard reference works in the field. True to his origins, Gabriel Terrades also has a keen interest in Spanish painting and, in 2011, the gallery staged a prestigious exhibition on this topic. In addition, the gallery participates every year at the Salon du Dessin, Gabriel Terrades being one of its founders.